For a full review of conference events, including a summary of afternoon working sessions, read the conference proceedings. 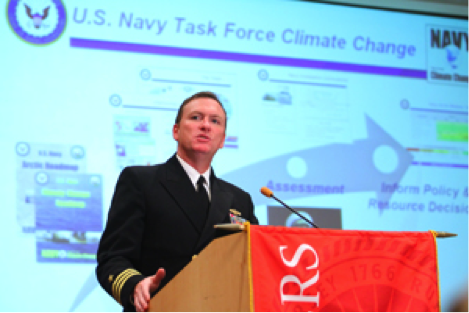 Climate scientists predict that heat waves, droughts, and heavy rains are likely to increase in frequency and severity as the climate changes, and sea level rise will lead to erosion and wetland loss as well as exacerbate the effects of coastal storms.

On Tuesday, November 29 a workshop at Rutgers University responded to a clear and compelling need to bring together public and private sector leaders to assess and discuss the most significant effects of climate change in New Jersey and to begin preparedness planning to minimize economic impacts.

Organized by Clean Air-Cool Planet in partnership with the Edward J. Bloustein School of Planning and Public Policy and the Rutgers Climate Institute at Rutgers, the State University of New Jersey, with support from PSEG, the workshop brought together a broad array of experts to discuss climate change impacts of particular importance to New Jersey at the workshop, Preparing New Jersey for Climate Change.

“This workshop takes the first step in the development of a common information base and the creation of a network of New Jersey leaders and practitioners who will be better prepared to serve New Jersey communities, businesses, and other stakeholders as we begin to address the challenges of climate preparedness,” said Dr. Anthony Broccoli, director of the Climate and Environmental Change Initiative.

The initiative is a university-wide multidisciplinary research, education, and outreach effort focused on understanding the mechanisms that drive global and regional climate change; predicting the future of the climate system and the impacts of change, including those on a densely populated, coastal society; and informing society about the causes and consequences of climate change.

In his keynote U.S. Navy Capt. Tony Miller, Deputy Director of Task Force Climate Change, noted that risk preparedness in the face of a changing climate change is emerging as priority in the military sector just as in the civilian sector. In May 2009, the Chief of Naval Operations created Task Force Climate Change (TFCC) to address the naval implications of a changing Arctic and global environment. The Task Force was created to make recommendations to Navy leadership regarding policy, investment, and action, and to lead public discussion on this serious issue.

Panelists at the workshop noted that July 2011 was recorded as one the state’s warmest, tied with 1955, and six of the 10 warmest Julys have occurred in the past 18 years. Hurricane Irene was ranked among the all-time top five precipitation events in the state, with streams and rivers rising to record or near-record levels. And August 2011 has been officially declared the wettest month of any on record in New Jerseyâ€"and that is only partly due to the effects of Hurricane Irene.

“Climate impacts are no longer just speculation. We are seeing the first clear signs of how more extreme and unpredictable weather will affect our communities, public health, and economic development. We owe it to our children and grandchildren to start preparing to address the coming challenges now,” explained Adam Markham, president of Clean Air-Cool Planet.

Clean Air-Cool Planet has a more than decade-long track record of working to explore and promote solutions to climate and energy challenges with leaders from different sectors. “Communities throughout the Northeast are crying out for hard information and good advice on how to prepare for climate change impacts and reduce their vulnerability,” said Markham. “We’re delighted to have helped get the ball rolling here in New Jersey today and to be playing a role in beginning to answer these important questions.”

“We hope to communicate the outcomes of this workshop to the public, key policymakers, environmental leaders, and the non-profit sector,” noted Dr. Broccoli. “The ultimate goal is to develop and facilitate a consensus-based strategic planning process for climate change vulnerability assessment and preparedness for New Jersey through the development of sound and cost-effective public policies.”